I’m Not Racist…Am I was co-produced by The Calhoun School and Point Made Films as part of the school’s Deconstructing Race project, a larger initiative designed to transform a silenced conversation and fundamentally alter the dialogue surrounding white privilege and structural and systemic racism for K-12th grade students, their parents, and teachers.

Catherine is a director, writer, and producer with Point Made Films. She co-produced In 500 Words or Less, which followed four high school seniors as they tried to figure out who they were and who they wanted to become while forging through an anxiety-filled college application process. She also wrote and produced the Adopted: We Can Do Better educational DVD series for adoptive families.
Follow @cewigginton

André produces and directs for film and television for Point Made and his production company, Many Things Management. He directed and produced The Prep School Negro, a film documenting his personal journey as a high school scholarship student, exploring what he gained intellectually but lost emotionally when he left the streets of Philadelphia each day for his elite private school.
Follow @AndreManyThings

Russell has been shooting and editing film, commercials, and music videos for more than 15 years. His past work with Point Made has included shooting for Adopted, Adopted: We Can Do Better (as DP and editor); and In 500 Words or Less.

Ashwin’s body of work as editor encompasses all formats from short promos and commercials to feature length documentary films, including Andre Robert Lee’s The Prep School Negro. He has collaborated as a storyteller with major broadcasters, independent filmmakers and non-profit organizations, and his work has aired on networks such as Showtime, Discovery, National Geographic, MTV, and CNN, among others.

Barb is the founder and president of Point Made films. She directed and produced the feature-length documentary Adopted, a film about the unforeseen complications in transracial adoption, along with its companion educational series Adopted: We Can Do Better. She was also executive producer of The Prep School Negro and In 500 Words or Less.

David joined Calhoun’s faculty in 2001 to teach third grade, after a career as an entertainment and marketing producer for American Express, Philip Morris, Exxon, and General Motors Europe (Opel). He started developing the Deconstructing Race project in 2007 after attending an Undoing Racism Workshop sponsored by the People’s Institute for Survival and Beyond. In January of 2012, he received a grant from the W. K. Kellogg Foundation and left the classroom to oversee the project full time.

William has been a part of documentary filmmaking for a year. I’m Not Racist… Am I? will be his second feature film as an associate editor, and his first production as editor for short-form web videos.
He recently graduated from Rensselaer Polytechnic Institute with a BS in Electronic Media, Arts, and Communications.

Point Made Films, an independent production company in New York, focuses on telling stories about the many layers of American identity. We have uncovered the unforeseen complications in transracial adoption; examined the experience of African American scholarship students at elite private schools; and watched high school seniors approach their next rite of passage. 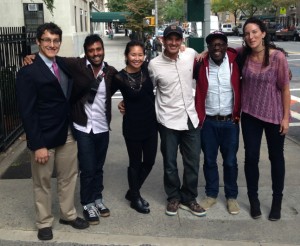